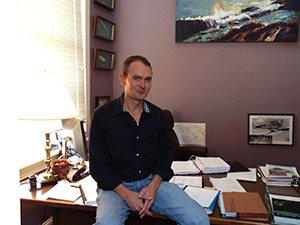 Alexandria, VA—For Christopher Leibig, a practicing attorney in the state of Virginia since 1996, a career in criminal defense started with clambering onto a roof.

Leibig explains: “The summer after my first year of law school I got a job as an investigator for the Public Defender Service in Washington, D.C..  My second or third day on the job, my boss asked me to climb onto a row-house,” to see if police officers could really have seen a drug deal.  The police's eyewitness view of the drug deal was the biggest piece of testimony against the defendant, so Leibig was shocked when he climbed the house and discovered that the officers couldn't possibly have seen what they claimed to.

“A few days after I testified at a jury trial about it … after that, I knew I wanted to be a public defender.”  After serving indigent defendants as a public defender for six years, Leibig switched to private criminal defense practice.

The types of evidence being used in criminal trials today are changing with new technologies, and Leibig has kept up.  He has been actively involved in litigation about warrantless tracking with GPS technologies, and has taken classes about DNA and other scientific topics at the Forensic Science Master’s Program at George Washington University.

Even with these new technologies though, Leibig believes that “many cases turn on the same things they ever have: what happened, and why, and a lot of those questions will always be about emotions and not science.”

With his increasing name recognition in the Northern Virginia area, Leibig attempts to keep his volume low. .  “I think it's important not to make yourself too busy,” he says.  “You have to learn to turn cases away so the people you do represent get enough of your time".

Handling cases that are followed closely by the press can create challenges for defense attorneys, according to Leibig.  “Those cases put everyone, including prosecutors and judges, under a different sort of pressure.  As a defense attorney, the main thing is to never do anything that is not strategically designed to help your client.”

In addition to new technologies, Leibig says that criminal defense work is heavily affected by   the increase of mandatory minimum sentences.  “Lots of pleas happen because the laws force the client to risk too much to go to trial,” he says.  “This is the problem with mandatory minimums, the fact that juries are not allowed to know how harsh the punishment will be when they are deliberating about someone’s guilt or innocence.”  Because of these sentencing rules, for many criminal defendants, a guilty plea can be the only decision that makes sense from a risk avoidance perspective.

Perhaps it was his start as a public defender that makes him more sympathetic to certain kinds of cases, but Leibig doesn't necessarily demand that every single client have enough money to afford his services.  “A few times a year I will meet a client who I want to represent even if they can't come close to affording it,” he says.  “Sometimes you just see a case and think, if I'm not gonna do this, why am I even a lawyer?”

For more information about the Law Offices of Christopher Leibig, see www.chrisleibiglaw.com.