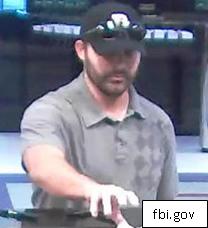 On November 20, 2012, the Federal Bureau of Investigation (FBI) in Newark asked for information from the public for a series of four bank robberies that occurred starting in August 2012.  During all of the robberies, the man approached the teller, gave them a note demanding money, and walked away with an undisclosed amount of cash.  During two of the robberies, he wore a baseball cap containing the letter “R.”  The FBI believes the letter stands for Rutgers.


The robberies are summarized below:


The last robbery occurred on November 16, 2012 at the TD Bank on 70 Middlesex Avenue in Metuchen, New Jersey around 7:15 p.m.  He was wearing a black jacket, gray shirt, blue jeans, white sneakers, large sunglasses, and a baseball cap.


The man is described as white and about 5’8” tall and 170 pounds.  He had a beard and mustache during all of the robberies.


If you have any information about the bank robberies, you need to contact the FBI at 973-792-3000.  Do not attempt to apprehend the suspect on your own.  You can also contact 911 if you suspect you’ve spotted the bank robber.