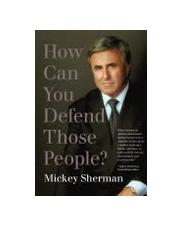 “The public view is that everyone must be guilty if they got arrested,” Sherman told laws.com in a recent interview.  “Also, we now have the 'CSI factor.'  All these crime solving or forensic investigation television shows affect the public perception of what crime is, though that probably hurts the prosecutors more than the defendants.”

Sherman is no stranger to television himself.  In fact, a case in which he was defense counsel was the first trial to be broadcast in its entirety on then-fledgling Court TV.  He has provided commentary over the years for high profile trial coverage, including the O.J. Simpson trial, and worked with CBS's Early Show as a legal analyst for four years.

Commentary, Sherman explains, is an art—and not one that all attorneys are naturals at.  “You'd be surprised at how many intelligent lawyers are not good commentators, or get insulted when Nancy Grace cuts them off,” he says.  “It's just part of the show.  Another problem I have noticed is that when some attorneys get in front of the camera, they can't contain a thought or an answer in the short time they are given.  Just because you are great in court does not mean you're great for TV.”

His secret to television success?  “Although I take my job as a legal analyst seriously, I don't take being in front of the cameras too seriously.”

Over the years, Sherman has defended a number of controversial clients.  Those cases led to him hearing the same question so often that he decided to write a book using it as the title: “How Could You Defend Those People?”  He says: “I could be walking in a Dunkin' Donuts, or attend an exclusive cocktail party, and people always asked me, 'Hey, Mr. Sherman, how could you defend those people?'  I could be giving a speech at a prestigious legal organization or just walk down the street and people always ask me that question.  The book is more like a backstage pass to the criminal justice system and my career.”

Sherman's career as an attorney led his son Mark to pursue a career in law as well.  When advising him, Sherman says his advice was to “spend more time listening to clients, and never pre-judge anyone.  We are not in the business of judging people.  Both sides sometimes want to win so much that they cut corners.  My best advice would be not to cut corners.”

Today, Sherman is running his own firm in Connecticut, and says that when deciding whether to take a case to trial, “Each case is different.  You listen to your client and learn the facts.”

Not all attorneys are willing to take cases to the courtroom, says Sherman, which often stems less from the case itself and more from an attorney's insecurities.  “So many lawyers don't want to or are afraid to go to trial.  They are afraid of the unknown.  To me, the spontaneity is one of the best parts of being a criminal defense lawyer—an adrenaline rush occurs when I am in the courtroom.”

Get an Alarm System and Be Protected From Burglary