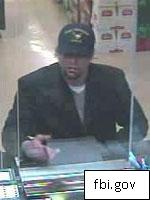 
The FBI announced that the man is suspected in one robbery but may be linked to other robberies as well.


The robbery occurred around 4:33 p.m. on Tuesday, November 27, 2012.  The US Bank was located in the Vons grocery store on 5555 Balboa Avenue in San Diego, California.  The man entered the doors on the east side of the store, approached the teller, and sat down in a chair in front of the teller’s station.


The man proceeded to pull out an envelope and a piece of paper with writing inscribed on it.  The piece of paper appeared to be a demand note because the teller looked at the note, put a sum of money in the envelope, and returned the envelope to the unidentified man.  After the man received the money, he stood up, walked away from the teller’s station, and left the store through the doors on the west side.


Nobody was hurt during the robbery.


The man is described as Caucasian, about 30 years old, 5’6” to 5’10” tall, and about 130 to 140 pounds.  He had brown hair during the robbery and had a brown goatee.  He was wearing a blue baseball cap with yellow letters, a dark coat, a gray T-shirt, and light blue jeans.


If anyone has information about the robbery or suspect, they should call the FBI at (858) 565-1255 or Crime Stoppers at (888) 580-8477.  Individuals are discouraged from approaching a suspect by themselves or with the help of other people because the suspect may be armed and dangerous.

A Guide to the Hacker’s Denial of Service Attacks

A Brief Overview of Criminal Procedure