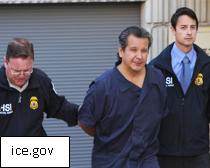 
According to the indictment, Delgado conspired with drug cartel members and others between July 2007 and December 2008 to launder money from drugs proceeds, and the proceeds are enormous.


ICE reports that Delgado may have helped the drug cartel launder over $600 million from drug proceeds.  The drug cartel is located in Guadalajara.


Delgado made his initial appearance in court on November 5, and he is scheduled for his detention hearing today, on November 8.  He faces up to 20 years in prison for the conspiracy charge.


Dennis A. Ulrich, special agent in charge at HSI El Paso, stated: “Drug cartels operate solely on the basis of greed.  However, when they can also corrupt trusted authorities, the integrity and stability of both countries’ financial infrastructure may be at risk.”


FOCUS is made up of HSI, IRS, DEA, and Texas Alcohol and Beverage Commission members who work alongside the U.S. Attorney’s Office, ICE’s Office of the Principal Legal Advisor, and the Secret Service.  Select members of these agencies target the following crimes:

Facts About Denial of Service Attacks