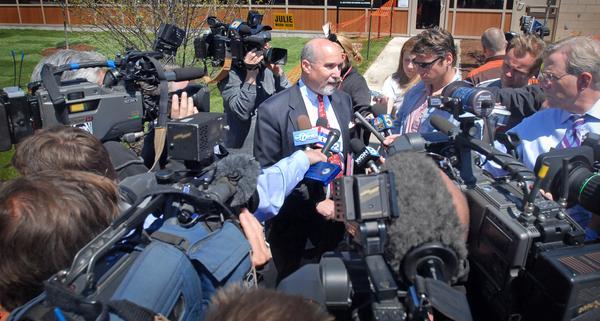 Chicago, IL—For defense attorney Joel Brodsky, the default in a criminal case isn't to start negotiating a plea deal with the government.

“My philosophy in a criminal case is to fight,” Brodsky told laws.com in a recent interview.  “I always say, you don't need to hire an attorney to plead guilty—you can do that yourself.  You need an attorney to fight for you.”

Brodsky, a lifelong Chicago resident and a lawyer since 1982, says that the area of criminal defense practice is changing substantially because of technology.  “Cell phones, forensics, pathology and other disciplines are always improving, so there is always something new to keep up to date with in this area of law,” he explains.

Criminal defense attorneys, unlike other legal specialists, often have to contend with problems involving extensive media interest in the cases they're working on.  Over the years, Brodsky—an award-winning lawyer who has been named one of the Top 100 Trial Lawyers by National Trial Lawyers—has handled a number of these cases, and has learned a number of lessons from working around media frenzies.

“One of the lessons I've learned is that the media has to be managed from the get-go,” he says.  “You really need someone who can handle the media, such as a public relations expert—someone who is able to say 'no' to a Nancy Grace and 'yes' to the Wall Street Journal.”

While Brodsky welcomes technological changes in the courtroom in many ways, there is one piece of technology he feels needs to be kept out of trials.  “If I had the choice, I would never allow a camera inside the courtroom, because it is destructive to the defense.  There are people in the public who watch the cases on television who make the case the focus of their life.  People set up blogs and spend hours watching trials,” he says.

As trials become home entertainment, Brodsky feels that the practice of law will be cheapened and defenses will be hurt.  “I think what's going to happen next is that these trials will become entertaining to the public, just in the way that reality television is popular today,” Brodsky speculates.  “The audience expects one type of ending to every story, and that is for the 'bad guy' of the story to lose and the 'good guy' to win.  It's going to become a real issue if we continue to televise and monitor these cases.”

Some of the cases Brodsky is handling today involve accusations of police misconduct, including the case of Darryl Christian, who has already served 23 years in prison.  “We have the Torture Inquiry and Relief Commission of Illinois involved in this case, because the police basically beat and tortured him for a murder confession for a crime he did not commit,” Brodsky says.  “The state commission already found that he was tortured and I am hopeful that he will be released soon..”

While Brodsky has won a number of accolades and awards, he says that he's proudest of the rewards that can't be hung on a wall: “What I value most is the appreciation I receive from my clients—being able to achieve the best results I can possibly get and have them tell me that they are grateful for all the effort and time I have put into their case.  The best feeling I have is when I am able to give someone their life back.”

To learn more about Joel Brodsky and his practice, click here