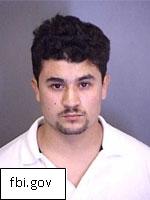 On November 7, 2012, the Federal Bureau of Investigation announced that it is seeking information on a fugitive name Francisco Molina-Neave.  He is wanted for assault and using a weapon after the assault.


A witness eventually saw the beating and Molina-Neave fled.  Molina-Neave was spotted a short distance away, but he fled down an alley after the police arrived.  As a perimeter was forming, police heard two different gunshots.  Witnesses later told police that Molina-Neave and another Hispanic man shot at their car before they ran away.


Molina-Neave was arrested on May 17, 2006 and faced extradition, which he refused.  A Texas court let him post bond, but he never appeared in court and was arrested again in May of 2007.  His bond was then set to $1 million.  He posted bond again, but after his appeal was denied in October of 2007, he fled a second time.  He is still considered a fugitive.


Molina-Neave has three freckles or moles that appear in a crescent shape on his right cheek just below his right eye.  If you have any information about the fugitive, you need to contact your local FBI office of the closest American Embassy or Consulate.

The Facts About Piracy